1. Patrick Ledwell and Mark Haines met when they both featured in the hit show Come-All-Ye at the Charlottetown Festival. Patrick’s wife needed the car show nights, and so he asked Mark for drives home, 6 nights a week. So like many promising things, the plot for The Island Summer Review was hatched in a van.

2. Patrick has been featured 5 times on the popular CBC Radio show “The Debaters.” He won over an audience in Moncton, by sharing that his PEI village had fundraised to buy him a new shirt. Yes, to be featured on the radio. Host Steve Patterson called him “one of the most consistently hilarious comedians in Canada.”

3. Co-star and musician Mark Haines has a career spanning 35 years, and venues from Sweden to Taiwan, the Fortune Community Hall to the Royal Alexandra in Toronto. He could coax friggin’ music out of a set of toenail clippers.

4. Harmony House Theatre in Hunter River dates back to 1846. Owners Kris and Melanie Taylor acquired the building in 2007, and have kept the vintage beams and bricks in the restoration. Island heritage feel, the best in a modern showplace, and yes, sweet air conditioning for summer. They also have 5 kids. No one knows how this all happens. 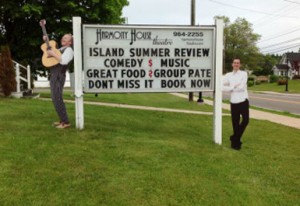 5. In The Island Summer Review, Patrick and Mark perform a song featuring over 140 Island names. It will not fit into a Tweet, because Twitter only allows 140 characters. You can catch a snippet in the short video from Sally Cole at The Guardian.

6. To promote the show, theatre owner Kris Taylor created two life-sized cut-outs of Patrick and Mark, hanging out by the sign next to Route 2. These cut-outs are life-like enough to have caused double-takes from drivers-by. Check out Harmony House on Facebook, where they’re running a weekly ticket contest to find an extra set of cut-outs, hidden somewhere in central Queens County.

Guardian video with a snippet of ‘I Know Everyone’

7. Patrick has a comedy set called ‘Compost,’ which sends up the Island’s popular local CBC newscast, ‘Compass.’ Like ‘Compass,’ his stories are accompanied by interesting digital graphics, on a large screen behind him. Unlike ‘Compass,’ his stories don’t repeat fully in the second half.
8. Mark has one song that explains a drum called the ‘bodhran’ and one song that involves a costume change. Only one of these songs flashes some real skin. The show is appropriate for all audiences.

The Island Summer Review June 27 to the end of August

9. Patrick and Mark have written a song explaining the finer points of the Island’s Waste Watch system. Ironically, the show itself contains mainly new– not recycled– material. 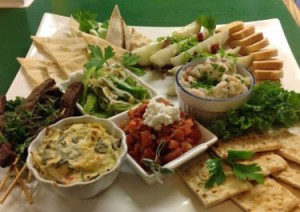 10. Harmony House Theatre has a fully licensed lounge on the lower level. Meet up for drinks before the show, or at intermission, and take your beverage right to your seat. An incredible chef-created tapas platter is available before the show (pre-order with your seats 964-2255). Oh, ‘tapas’ is Spanish for ‘enough food for 2 hungry people.’

11. Patrick went to elementary school across the road at Central Queens Elementary. Kris Taylor was one of his classmates. At school, he was told that smart-alecky antics would get him nowhere. Well, they’ve gotten him across the road, thirty years later, as a semi-professional comic in Canada’s smallest province. Ha ha, teachers.