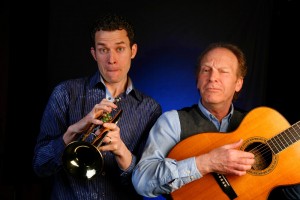 The runaway Island hit of 2013 is back to Harmony House for summer 2014, with a firewagon full of new comedy and music.

Starring Patrick Ledwell and Mark Haines, “The Island Summer Review 2” aims to have another summer of packed houses stomping their feet, in laughter and along with the beat. This brand-new show delivers authentic Island stories through a variety of comic and musical lenses. There’s stand-up comedy, traditional and contemporary music, mock-informative slideshows, and new combinations at every curve. Like a good Island back road, “The Island Summer Review 2” brings you home, but with unexpected turns, so you can see a familiar place in a new light.

“The Island Summer Review 2” begins June 26th and runs every Thursday, Friday, and Saturday evening at 8 p.m. until August 30th.

Todd MacLean of The Guardian praised the 2013 show as “a joyride of standup comedy and music that might just be one of the best ways to laugh at ourselves that has ever been done on P.E.I.”

Tickets $22 plus HST, with 20%-off specials for the first 2 July weekends

Audiences and reviewers agree that “The Island Summer Review” strikes a chord that resonates, with Islanders and visitors alike. Luke Arbuckle with The Buzz wrote that Haines and Ledwell “provide a fascinating roller coaster of emotion”: “Between foot-stomping fiddle tunes, heartstring-tugging anecdotes and side-splitting comedy, audiences are hopelessly captivated at all times.”

“The Island Summer Review 2” will pull together a new year’s bumper crop of reflections on Island life and culture. If you’ve been already, come see the new show. If you haven’t been, consider this your invitation to laugh, sing some songs, and check your day-to-day worries at the door.

Patrick Ledwell’s quick-witted comedy has brought him national recognition with multiple appearances on CBC Radio’s “The Debaters.” His first book, “I Am an Islander” was published in 2012, and it’s on its way to becoming a Canadian best-seller.

Mark Haines is a multi-instrumentalist, a gifted entertainer, and a sought-after collaborator. He brings a wide repertoire of roots-based music and an engaging personality to every one of his performances, whether it’s the local pub or the Royal Alexandra in Toronto.